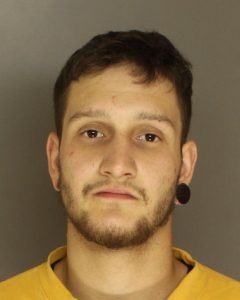 On Sunday, October 6 at 12:06 AM, Upper Allen Police attempted to stop a vehicle for a traffic violation. The vehicle failed to stop for police. After a vehicle pursuit, the driver eventually stopped in a parking lot and was identified as Justin Barritt. Barritt was taken into custody and transported to the Cumberland County Prison for processing. A preliminary hearing will be held at a later date.