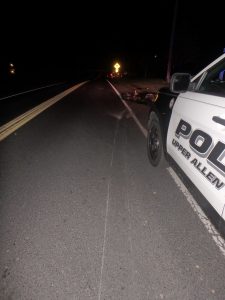 On Wednesday, October 14, 2020 at approximately 7:15 PM the Upper Allen Police responded to the intersection of East Winding Hill Road and Tolman Street for a crash involving a motorcycle. The investigation revealed an unknown vehicle illegally turned left in front of a motorcyclist traveling west on East Winding Hill Road. This illegal turn caused the motorcycle to crash on the roadway, injuring the male rider. Within minutes, another vehicle traveling west on East Winding Hill Road crashed into the motorcycle, causing a second crash. Both vehicles were towed from the scene as a result of the second crash. The male rider was transported to an area hospital for evaluation of injuries he sustained during the initial crash. No injuries were reported from the second crash.

The vehicle which initially caused the crash is described as a brown or gold colored sedan, possibly a Volkswagen CC. This vehicle stopped at the scene momentarily, then fled the scene when confronted by the motorcycle rider. This vehicle may have damage to the lower portion of the passenger side or rear bumper. Anyone with information is asked to contact Upper Allen Police at 717-238-9676. An anonymous tip line is also available by calling or texting 717-850-UAPD (8273). Anonymous tips can also be submitted online by visiting: www.upperallenpolice.com.