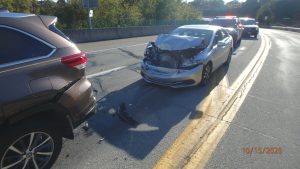 On Thursday, October 15, 2020 the Upper Allen Police responded to the intersection of Mt Allen Drive and East Winding Hill Road for a three vehicle crash. The investigation determined that Orndorf and Neese were both stopped in the left turn lane on Mt Allen Drive waiting for the traffic signal to change. DeAngelis approached this traffic signal from behind the other two vehicles and also intended to turn left. DeAngelis mistakenly pushed on the accelerator instead of the brake pedal, which caused her vehicle to strike the rear of Neese’s vehicle, which in turn struck the rear of Orndorf’s vehicle.

The impacts caused severe damage to DeAngelis’ vehicle, which was towed from the scene. DeAngelis reported a minor injury, but refused evaluation by EMS. Neese and Orndorf’s vehicles sustained moderate to minor damage from the crash and none of the occupants reported any injuries.