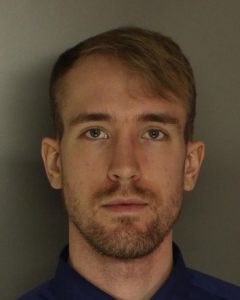 Charges:
Production and Possession of Child Pornography
Unlawful Contact with Minor
Invasion of Privacy
Criminal Use of Communication Facility

On Wednesday, December 2, 2020 at approximately 9:00 PM Upper Allen Police responded to a local business after a cell phone was found actively recording in an employee restroom. Andrew Staub, an employee of the business, admitted to placing his cell phone in the restroom to record his coworkers. A juvenile employee of the business was also recorded in the restroom. Staub also admitted to secretly recording his coworkers outside the restroom for the past year. On December 15, 2020 Staub surrendered on an arrest warrant obtained in this case. Staub was afforded a preliminary arraignment and was released on $25,000 bail. On December 28, 2020 Staub waived his right to a preliminary hearing.