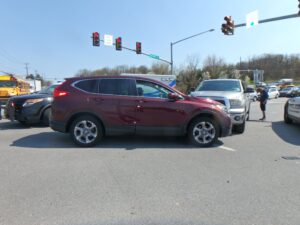 On April 8, 2021 at approximately 2:34 pm Upper Allen Police were dispatched to the intersection of Gettysburg Pike and Cumberland Parkway for a two vehicle crash. Upon arrival police learned that both vehicles, which were travelling in opposite directions, believed that they had a green signal and right of way. As one vehicle attempted to turn left onto Cumberland Pkwy, the other vehicle travelled straight and the two collided. One of the operators sustained an injury in the crash.