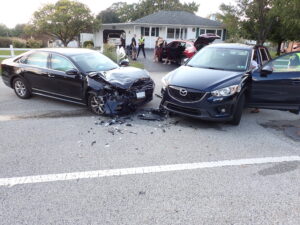 On October 4, 2021 at approximately 3:15 PM, Upper Allen Police were dispatched to the intersection of Mt. Allen Drive and Allenview Drive for a two vehicle crash with injuries. The investigation determined that the operator of the Mazda CX-5 turned in front of the operator of the Volkswagen Passat, when it was not safe to do so. It was also reported that the Volkswagen Passat was exceeding the speed limit at the time of the crash. The Volkswagen then struck the Mazda causing disabling damage to both vehicles.