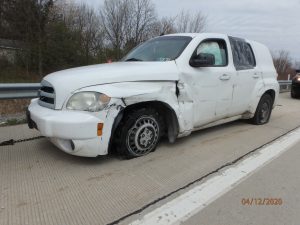 On Sunday, April 12, 2020 at approximately 1133 hours The Upper Allen Township Police were dispatched to U.S. Route 15 south for a report of a reckless driver. A calling motorist observed a white station wagon repeatedly striking the jersey barrier on US Route 15 south beginning in the area of mile marker 40.4 in Lower Allen Township and continuing south into Upper Allen.