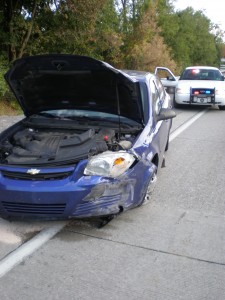 On Saturday September 4th at 5:45 PM Knaub was traveling on Route 15 northbound in the left lane as she approached Grantham Road. Another vehicle, possibly a tan Ford Taurus with a Maryland registration, passed her on the right and then cut in front of her to get ahead of Knaub’s vehicle. Knaub then attempted to move to the right lane, over steered and lost control of the her vehicle. She struck the center concrete median, then went back to the right and struck the guide rail off of the shoulder. The right lane of Route 15 North was closed down for over one hour.

Late Morning Crash Sends One to the Hospital 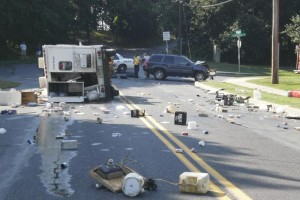 On Thursday, September 2, 2010 at 9:51 AM, the Upper Allen Police responded to the intersection of Allendale Road and Wilson Road for an auto accident with injuries. Police arrived on the scene to find Gorecki’s box truck overturned and blocking the roadway. The on scene investigation revealed that Smeltz, who was traveling west on Wilson Road, failed to come to a complete stop at the intersection. Smeltz’s vehicle entered the roadway and struck Gorecki’s truck, which was traveling north on Allendale Road, in the area of the rear axle. This caused Gorecki’s truck to become off balance, resulting in the truck overturning. Gorecki was transported to Hershey Medical Center for assessment of his injuries. Smeltz was not injured, and refused EMS treatment on the scene. Smelt’z vehicle was towed from the scene, and Gorecki’s truck was up-righted and towed from the scene as well.

At 10:30 PM on August 31, 2010, Upper Allen Police were called to a residence in the 3500 block of Rolo Court. A teenage resident there had been alerted to noise outside of his residence. He opened the door and saw a younger white male, in his late teens or early twenties, with long blond hair standing on the patio of the residence. That person fled and the teen gave chase. The resident caught up to the prowler at which time the prowler struck the resident. The two exchanged punches and the prowler fled the scene. The resident did suffer minor injury to his hand and was later taken to the hospital by private vehicle for evaluation. A tracking dog was summoned and the suspect’s flight route was followed to the area of West Lisburn Road and Gettysburg Pike.

On Tuesday, August 24, 2010 at approximately 5:30 PM Upper Allen Police investigated a minor crash at the intersection of Cumberland Parkway and South Market Street. Christopher Webb was traveling behind Toni Federico. Federico stopped at the steady red light to yield to traffic before turning right onto South Market Street from Cumberland Parkway. Webb rear-ended Federico causing very minor damage to each vehicle. A female passenger in Webb’s vehicle complained of minor injury but refused EMS. Webb was cited for Following Too Closely.

On Saturday August 21, 2010 at 12:42 PM Upper Allen Police were dispatched to a motorcycle crash on US Route 15 North in the area of mile marker 38.1. The initial investigation reveals that a piece of furniture was laying in the middle of the travel lanes of US Route 15 North. Both lanes of traffic slowed to maneuver around the furniture. Stevens, who was riding a motorcycle, apparently swerved to avoid hitting slow moving traffic, struck a guide rail and was ejected from his motorcycle. Stevens was pronounced dead on the scene of the crash by a representative from Cumberland County Coroner’s office. Stevens was not wearing a helmet.

The crash is still under investigation and Police are seeking any/all witnesses to this crash. If you are a witness please contact the Upper Allen Police Department at 717-795-2445 or 717-238-9676.